Recently, I was having a conversation with someone who commented on how appalled they were that a friend of ours, with a high-level and high-paying job, had recently purchased a very basic car. “How can he drive that cheap car when he has such a high-level job?! It just looks bad.” Huh?

The comment got me thinking about lifestyle inflation and how most people, no matter how much they earn, will never accumulate any wealth. Instead of saving and investing money as they earn more throughout their career, they spend it as fast as they make it. Their explanation for why they have to keep spending? Their life has to reflect their job title and salary. Yikes.

I call this the lifestyle inflation metric. The more you make, the more you spend. Huge swaths of the population subscribe to it and it’s keeping them perpetually in debt and making them poor.

A couple days after that conversation, I saw the headline about Roberta Buffett’s $100 million gift to Northwestern University and that got me thinking about her brother, Warren Buffett.

Everyone knows who he is – one of the richest men in the world. In 2014, he bought a 2014 Cadillac XTS and traded in a 2006 Cadillac DTX. Warren Buffett, the billionaire, was driving an 8-year old car! According to Kelly Blue Book, the 2006 Caddy was worth around $12,000. The new car cost around $48,000. If you subscribe to the lifestyle inflation metric, you find this appalling. He should be driving a rare Ferrari or a Maybach or something more fitting his position and wealth. And he should replace it every couple years. 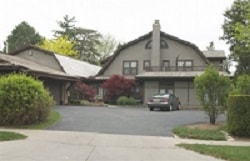 Now, let’s talk about his house. Warren Buffett lives in the same house he bought for $31,500 in 1958 (see picture above). It’s in the best neighborhood in Omaha, and according to Zillow, it’s worth around $775,000 now. When Buffet bought that house, he was already a millionaire. According to the lifestyle inflation metric, he should be living in a grandiose mansion(s) that is a reflection of his job title and income.

What the lifestyle inflation followers don’t realize is this is how he went from paperboy to millionaire to billionaire. As he made more money, instead of spending it on things like bigger houses and fancy cars, he invested in the stock market and became wealthier. And wealthier.

There’s a phenomenon that occurs in Omaha from time to time. Some little old lady will die and will stun the community by leaving $5 million to the University of Nebraska. No one knew she was rich! She was an early investor in Berkshire Hathaway but never told anybody. As she became wealthier and wealthier, she continued living in an ordinary home, drove sensible cars and did the same things that non-millionaires do in Omaha. According to Bloomberg, there are millionaires all over the greater Omaha area hiding in plain sight, called The Buffett Millionaires. They aren’t ostentatious. Many still work. Many use their money for philanthropy.

So here’s what we can take away from this:

Don’t buy into the marketing hype of the lifestyle inflation metric. The rich didn’t get rich by blowing all their money on junk and living ostentatiously. And as they get richer most don’t change the way they live. Instead they get richer. Your home and your car don’t define you. You don’t need a bigger or better or newer “fill in the blank” to be happy. So kick the lifestyle inflation metric to the curb and live like Warren Buffett.