In the continual quest to get more bang for your buck, you may be drawn to the dollar store for items you’ve been buying elsewhere. You can definitely save money shopping at dollar stores for some items but, as with many things in life, pay attention or the deal might not seem so sweet later. 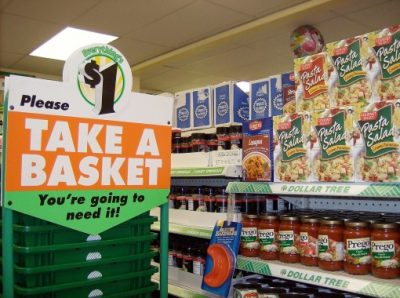 Not everything in a dollar store is priced at $1. In fact, in some, more than 70% of the merchandise, costs more. Among the major chains, only Dollar Tree sticks to the $1 price point.  Dollar General, Family Dollar and 99¢ Only start at $1 and take it from there. On the other hand, chains like Family Dollar not only take manufacturers’ coupons, but also produce their own in-store coupons, so savvy shoppers can really save on many name-brand items.

I’m sometimes amazed at what I find at Dollar Tree. Where else could I find a pink tutu and a “rhinestone”-studded crown for a 2-year old princess for a buck each? Dollar stores are among the best sources for low-cost greeting cards, gift wrap and bags, party decorations and office supplies.

Here are some tips for making the best of dollar store shopping:

One reason dollar stores can sell products at a discount is that items are packaged in smaller quantities. That means the box of aluminum foil may contain 20 square feet instead of 200. I recently found a box of M & M peanuts in single-serving packets. In my haste I didn’t notice that the familiar yellow package weighed only 3.74 ounces. That meant each of the six individual packets weighed just six-tenths of an ounce and held just eight candies. That may be good if you’re dieting, but not if you need a chocolate fix. I also found those “cracker sandwiches” that fill many lunchboxes in the same green, blue and tan cellophane wrap as other Lance products at less than half the price I pay at my supermarket. Only when I got home did I notice the individual packets held four crackers each instead of the usual six. A look at the fine print revealed it weighed 5.7 ounces, not the 10 ounces of the supermarket size.

As dollar stores seek to compete, most are stocking shelves with brand-name items, but are they the same? Familiar brands may come in unfamiliar sizes. That can be a good thing. A $1 tube of Colgate toothpaste weighed three ounces, smaller than the “normal” six ounces, but perfect for the TSA’s three-ounce limit on toiletries — and a better deal than the teensy “travel size” tubes you get for 99 cents. Another example: Nature Valley Granola Bars were just $1 per box, but the box had only four bars, not the usual 12. If you’re single, that could be an advantage.

If you’re unfamiliar with a product, buy just one to see if it’s really the deal you think it is before stocking up. I bought a six-pack of raisins for $1, an apparent good deal. But the raisins were very small and a bit stale.

It might not matter to you if the food you’re buying is from Timbuktu, but it’s good to know the origin before you purchase. And while some food items have seemingly attractive prices, some come from countries that might surprise. I’ve found raisins from Argentina, not the expected California. Another package said the item was from “the U. S., South Africa and/or Chile.” One familiar brand of toothpaste was produced in Mexico and another in England.

Buy nonperishables when you see them

It pays to buy right away. At some dollar stores, the turnover is fast and items you see today may be gone tomorrow.

Avoid small toys and anything with a cord and electric plug. According to Consumer Reports magazine, many dollar stores continue to stock cheaply made toys that could pose a choking hazard, especially for young children. And, though, the selection is getting better, items you need to plug in may not be up to U.S. standards and pose a fire risk.

Medication is another fuzzy area. Products like pain relievers or vitamins may have looming expiration dates or not contain the labeled ingredients.