If you have a son or daughter in high school, then you know prom season is upon us. I have two daughters going to prom this year, and they have already started prepping.

As soon as they each bought dresses, they posted pictures in the Facebook group that the girls in their school created so no one buys or wears the same dress to prom. Our high school is small — fewer than 500 students — so the chances of someone else having the same dress is less likely than at bigger high schools.

While girls do not post the price of dresses, you can often tell that they are expensive. The clues come from the background where the picture was taken — often high-end local boutiques, or the website from which the image was captured when the dress was ordered online. 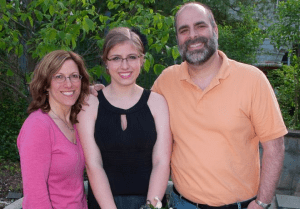 Spending a lot on prom is commonplace. A Visa survey from 2012 determined that the average promgoer spends more than $1,000. Last year, my older daughter Jane (now a high school senior and pictured here with my husband and me on prom night) spent only about $250 on prom. How did she do that? Smart shopping and some frugal DNA.

For example, she found her prom dress in the women’s formalwear section — not the prom section — of JCPenney. Her empire-waist, pleated black gown was priced at $50. Yes, you read that correctly — $50. She plans to have that dress shortened for a future LBD (little black dress) event at college next year.

Keeping the frugal theme going, she focused her shoe shopping at Payless Shoe Source. For years we’ve had luck buying shoes from Payless, mostly because we are a family of women with wide feet and Payless carries wide shoes. Jane chose a pair of Christian Siriano black pumps with a hot-pink sole; they cost $29.

Jane borrowed a black clutch from me, and “hired” her sister Annie to do her makeup. So did Jane’s best friend, who got ready at our house. My younger daughter Annie made $40 on the night. (She already has girls asking to hire her for makeup this year, but Annie is going to prom so she’ll be off the clock.) Jane’s one splurge was having her hair professionally styled for the night; that cost $100. Oh, and the prom tickets themselves — $80.

For past formal events, my daughters have also “shopped” in each other’s closets for new-to-them dresses, a free way to get a new outfit. Earlier this year, both girls brought dresses they’d worn to the homecoming dance and weren’t interested in wearing again to a local consignment shop so they could make extra cash to offset this year’s prom spending.

Some of the ways that guys in their school save on prom is to recycle the tuxedos they are required to wear as music students at each of their performances. Sure, they’re not the nicest tuxedos in the world — think lots of polyester — but they are free. Often the only parts of the outfit the guys will switch up are the tie and cummerbund or vest so that they match their dates’ dresses.

Groups of friends frequently pool their resources to rent a bus or limousine to take everyone to the prom. And with the advent of high-end cameras in today’s smartphones, no one needs to pay for formal pictures at the dance. Thankfully, the high school culture here isn’t for people to have a fancy dinner before prom, which can cause those prom costs to soar. I guess they realize that the food at prom isn’t half bad, so why not just eat there? At least that’s what Jane and her friends did last year.

For prom 2013, we weren’t as lucky in finding super inexpensive prom dresses — both my daughters started shopping at thrift stores but ended up at department stores where they each spent about $200 on a dress. However, we’ve already talked about how they are going to cut back in other areas of their spending, including foregoing the salon appointment for hair services. Additionally, both are planning to focus on Payless for shoes. And I have a feeling that Annie will do her own makeup as well as Jane’s this year — perhaps even tossing her sister a freebie.

There is no way my daughters could each spend more than $1,000 on prom. That’s about what they earned from some part-time work last summer, and they wouldn’t blow it all on one night. Even with taking a frugal approach to prom, I know that in the end they are going to have a great time and they won’t end the night with any feelings of spender’s regret.