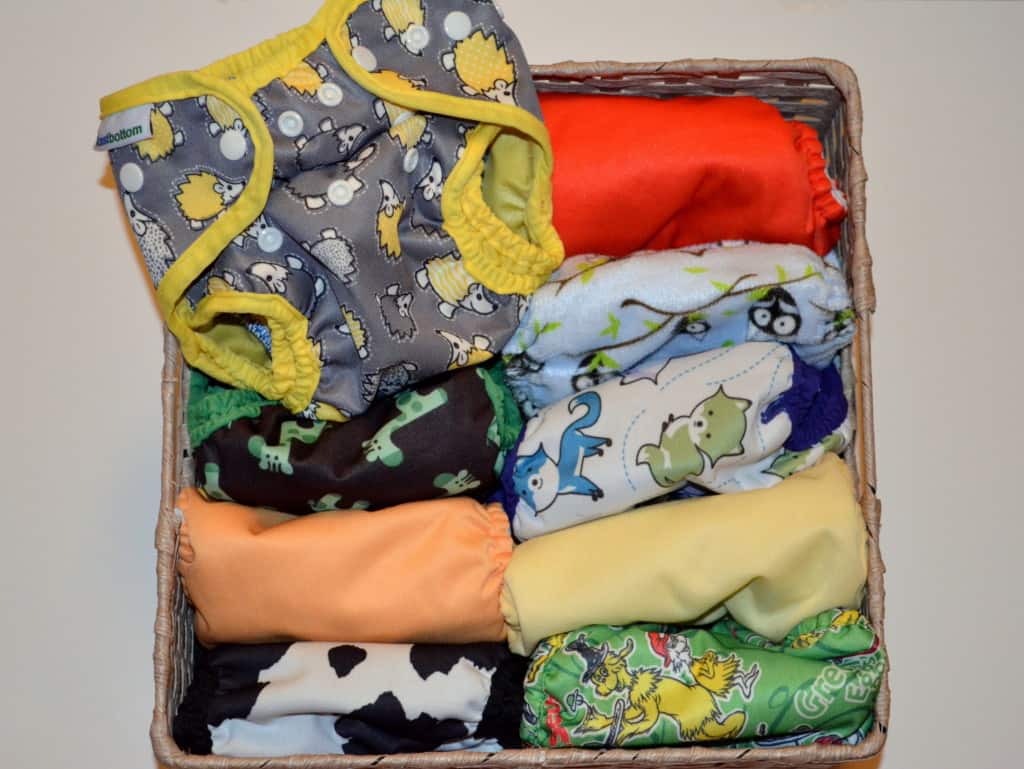 When people find out that we use cloth diapers, I get a few different reactions:

Cloth diapers aren’t anything like they used to be, and they are actually becoming more on trend as people have started to want to be more thrifty. Cloth diapers are much less wasteful and less expensive over the long haul (though more expensive up front), and can be healthier to use than disposable diapers. Some varieties are structured and fasten exactly the same as disposable diapers, but with velcro or snaps, so they are just as easy to use. Let’s compare cloth diapers to disposables to help you choose which method is best for your family.

When I became a mother, I learned that things that seem like they are going to be gross don’t even faze you once you’ve been pooped, peed and spit up on a few times.  When it’s your own baby who depends on you completely, it’s suddenly not as gross.  The first time my son had a diaper blow-out (when the contents of said diaper exceed its boundaries), I actually threw away the onesie he was wearing because it was so gross. At that time, we were still using disposable diapers; the secondhand onesie wasn’t very nice anyway, so I didn’t see the point in trying to salvage it. Now it doesn’t bother me if he has a leaky diaper, though it’s a rare occurrence when he’s wearing cloth.

Washing cloth diapers isn’t a big deal to me, either. My son is exclusively breast-fed. Breast milk is liquid and water-soluble, so we don’t need to rinse his diapers before we put them in the washing machine. Once he begins eating solids, we will need to rinse his soiled diapers with a diaper sprayer, dunk and swish them in the toilet, or use a disposable, flushable liner (which is just slightly thicker than toilet paper and easy to dump into the toilet). Then we can throw the diaper in a pail and wash as usual every two or three days.

While that all sounds a little gross, it really isn’t a deal breaker. Personally, I find the chemical smell of a wet disposable diaper to be gross, too. If the gross factor is the only thing that turns you off to cloth diapers, be assured that it isn’t that bad. There are plenty of other gross things that you’ll have to deal with as a parent.

Disposable diapers have the edge when it comes to absorbency and the stay-dry feel. But this comes at the expense of having chemicals and dyes next to your baby’s skin. Cloth diapers are also very absorbent, but to keep the baby’s skin dry and prevent leakage, you should change your baby every two to three hours.

Changing your baby more frequently, plus fewer chemicals next to baby’s skin, can cause less diaper rash than when using disposables. Because disposable diapers are so absorbent, people can wait longer than recommended between diaper changes, which can result in an increase of diaper rash.

How to choose the best cloth diapers

A benefit with cloth diapers is that you don’t spend money with each diaper change – you already own the diapers and will be washing them anyway, so adding a few more diaper changes per day isn’t going to add any additional cost. Disposables may be more absorbent, but I’ve found that cloth diapers are more likely to hold large messes because they can be adjusted to fit more snugly around the legs and waist. Many have waterproof barriers and elastic at the leg and waist bands. While stay-dry materials are available for cloth diapers, some parents choose to use cloth diapers during the day and disposable diapers overnight when their babies are sleeping for six or more hours in a row and they don’t want to wake them for diaper changes.

There is no doubt that disposable diapers are more convenient to toss in the trash when they are soiled.  However, just because something is more convenient doesn’t make it better.  Disposable diapers are the among the top consumer items in landfills; it’s estimated that it may take more than 250 years for a single disposable diaper to decompose. There are environmental factors in the production and laundering of cloth diapers as well, but the actual diapers can be used for years, and for multiple kids, before they end up in a landfill. It’s not difficult for us to put our son’s soiled diapers in a waterproof bag in the diaper bag when we are on the go, and put them with the other dirty diapers when we get home.

Laundry costs aren’t as daunting as some may imagine. I do two or three extra loads of laundry a week for the cloth diapers. Each load of diapers requires two extra rinse cycles (one before wash and one after), so it equals about five total loads of extra water and electricity.  The covers are line-dried to help them last longer, and I use the clothes dryer for the inserts. I haven’t noticed an increase in the electric or water bills, though any possible increase may be offset by the fewer and shorter showers that I take since I’ve become a mom. I have an Energy Star-rated washing machine and the estimated yearly operating cost is $22, so the additional two to three loads per week only cost pennies each to wash. Even a few extra dollars per month in water and electricity costs could never add up to the cost and environmental impact of buying and using disposable diapers.

Disposable diapers are estimated to cost $800 to $1,500 per year, per child.  If your child potty trains at 2½ years old, it will have cost $2,500 to diaper him up to that point using the $1,000 per year estimate. Each baby added to the family will cost a similar amount.

How to build a cheap cloth diaper stash

Purchasing a stash of cloth diapers that you wash at home (versus using a laundry service) will cost between $200 and $800, depending on the brand and style that you choose, and where you purchase them. While the cost for cloth diapers is up front, the one-time expense will carry you through several years and multiple children. Cloth diapers also have a high resale value if they are in good condition, so you may be able to recoup some of the expense once you are done with them. While some may be skittish about buying used diapers, there are plenty of ways to clean and disinfect used diapers to make them safe and germ-free.

Cloth diapers are adorable: They now come in any print and color imaginable.  Most disposables are not — especially once they are soiled and saggy.  Cloth diapers are a bit bulkier on your baby (some are much bulkier), so pants may fit tighter over them.  I cannot give a true opinion on the comfort of cloth versus disposable because my baby can’t tell me, but I know I’d rather wear cloth underwear than paper.

We waited to begin using cloth diapers until our son was big enough to fit into the one-size diapers, which was around 10 pounds and 2 months old. Despite the name, one-size diapers are usually too big for newborns, especially for those under 8 pounds, and I didn’t want to buy two sets of diapers. Waiting a couple of months also allowed time for his belly button to heal, and for us to get used to all of the other demands of parenting. Breast-fed newborns tend to have bowel movements 12 to 14 times a day. That’s more laundry than we were ready to tackle in the beginning, so the disposables were the best choice for us at that time.  Now we have a wide variety of cloth diaper brands and options (cover/inserts, pocket diapers, all-in-ones) that were purchased new, used and received as gifts from our baby registry.

It was really intimidating to start using cloth diapers, but once we did, it remains a very simple process. I do two to three loads of diaper laundry each week, and our son definitely has fewer diaper blowouts than when he was using disposables. We still opt for disposables overnight because we use a breathing monitor that clips onto his diaper, and the cloth diapers are too thick for the monitor to rest against his belly. Once he is no longer using the monitor, we will attempt to cloth diaper overnight with stay-dry options. My point is that even if you choose to use cloth diapers, it doesn’t have to be all-or-nothing. You can use disposables when it is convenient for you (newborn stage, overnight, traveling), and you will still save money on diapers compared to purchasing disposables.

What’s your experience? Did you find cloth or disposable a better or more economical option? 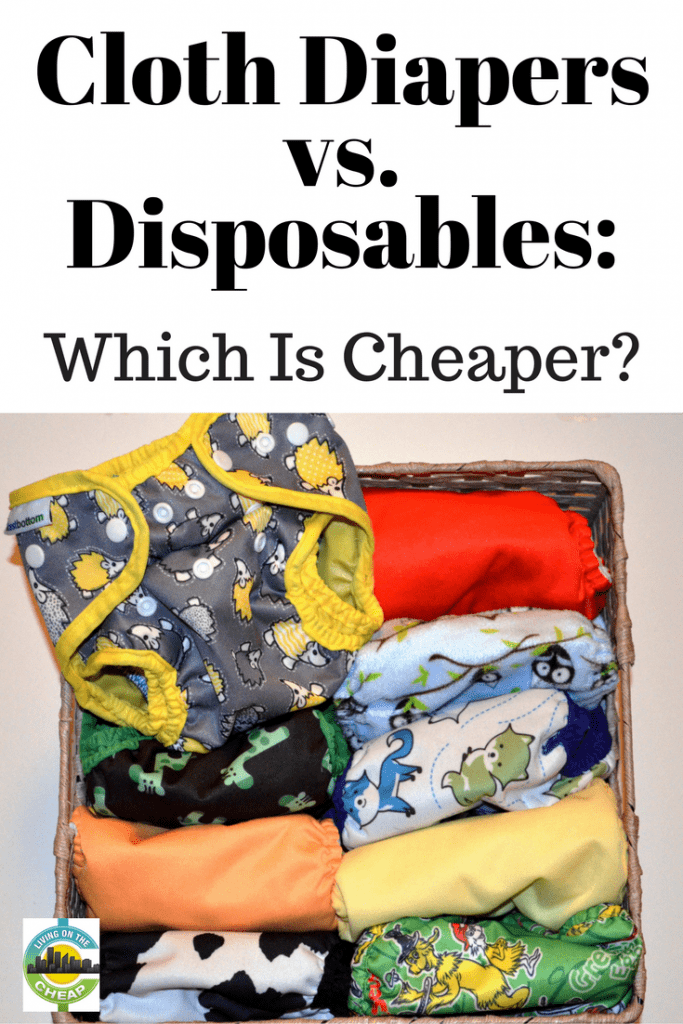 Val McCauley was drawn to writing about Living on the Cheap after moving to Columbus from her small hometown after college. She realized that there were a ton of events and activities going on around the city, but there wasn't a website that made it easy to find out about these things. Her love of travel and desire to get out of debt after college cemented the need to live on less while still having fun. Over the last several years, she has paid off all of her debt and still has fun. In her free time, she loves to workout, play sports, and cook gluten-free meals. Val is the owner and operator of Columbus on the Cheap and That’s What We Did.