Can you trade your laptop for a Chromebook? - Living On The Cheap

Google is nearly everywhere. It is an Internet company of monstrous proportions and it is hard to believe that it has insinuated itself so completely into our lives in a mere 16 years. Think about that … there was no Google before 1997.

Google search, YouTube, Maps, Android and a plethora of other software services are part of this company that earned more than $40 billion in profits last year. After it launched Android as a mobile phone operating system in 2007, Google  bought out Motorola’s cellphone division. Currently 52% of all smartphones run the Android platform.

The Chromebook is Google’s play to do the same thing with laptop computers. Of course, the company looked at traditional laptop models from Mac to Windows and Linux and took a slightly different approach.

What do you want a laptop to do? Google wants it to run on battery power for a long time, do the basics from a processing and power standpoint and be light enough to carry anywhere.

Google does the Web; it is its lifeblood. So the Chromebook is all Web, all the time.

Chromebooks do not have a traditional operating system. They run Google’s Web browser, Chrome, and that is it. A range of extensions and apps allows you to stretch what you can do with it.

I looked at two Chromebooks for this article: the Samsung Chromebook and the Acer Chromebook. They sell for $249 and $199 respectively. The two have similar features, including an 11.6 inch screen, a couple of USB ports, an HDMI video output port, a camera, WiFi and a memory card slot.

The big difference: The Acer packs a 300-gigabyte hard drive and the Samsung sports a 16-gig solid-state drive. This means the Acer has a lot more local storage, but considerably shorter battery life. The Acer also has a wired Ethernet port and a VGA output port but weighs half a pound more than the Samsung. That’s right: The extra $50 for the Samsung actually nets you fewer features.

However, because of the way the Chromebook works, that extra hard drive space is not worth as much as you might think. A Chromebook is designed to consume information directly from the Internet rather than store it locally. Google offers Chromebook users 100 gigs of storage on Google Drive for two years for free. That’s a $120 value.

So, the balancing act really comes down to battery power and storage. If this were for home use, I would lean toward the Acer; if I were looking for an out-and-about laptop, I’d go for the Samsung.

Both of these Chromebooks feel a little cheap. They are obviously made of plastic, the finish on the Samsung chips easily and both laptops have a fair amount of “flex” in them. Neither display is what I would call cinema quality, but each is serviceable for typical work. The Acer felt a little better put together to me.

The Samsung is obviously trying to mimic the design of another computer. 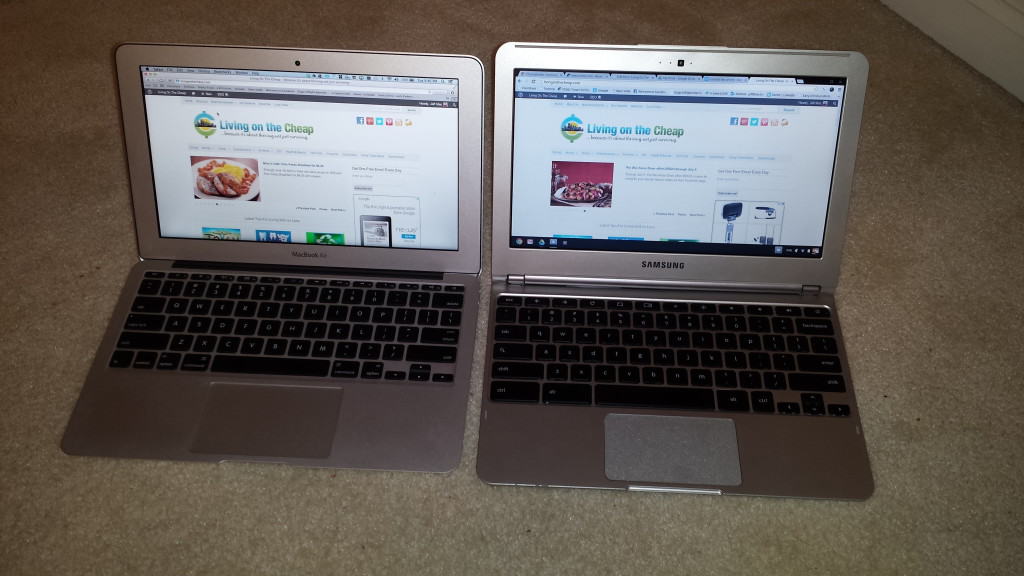 While the basic look and feel is there, no one is going to mistake the Samsung Chromebook for an Apple product once he gets close to it. You can see a vaguely blueish cast in the display, the keys are not backlit and the body is plastic rather than aluminum. The Chromebook also costs 85% less. If you say that out loud, it will really sink in.

I did the bulk of my testing on the Samsung and the hardware is pretty solid. The keyboard feels good and the battery life is excellent, easily living up to the 6.5 hours promised. The video output worked well when I hooked it up to a large TV and the dual hookup actually worked as two monitors. I kind of expected the second monitor to just mirror the display of the Chromebook, but I was able to spread things across both windows.

I did have a little bit of trouble getting the second monitor to scale correctly. The only time the Chromebook locked up on me was when I unplugged it from that secondary monitor. I had to do a hard reboot, but the Chromebook came back up quickly with no ill effects.

So what can you actually get done on a Chromebook?

Email is pretty obvious. Gmail is an excellent Web-based client that you can set up to use any email account. An icon in the task bar at the bottom takes you right to it. Keep in mind that while you need a Google account to set up a Chromebook, Gmail can be set up to show any standard email account or multiple email accounts. Gmail has excellent spam filtering, great folder management and can handle all of your email chores. You can confidently check this need off of your list for the Chromebook.

Of course, if Gmail is not your cup of tea, you can still use Outlook.com, another excellent Web-based email option for any account.

My experience with video was mixed. In general, normal videos played pretty well on the Samsung’s onboard screen; playing high-definition video or using an external monitor made for a stuttering mess. When I tried to stream HD video from services like Amazon Prime, I got an error message that said it was not supported on this device.

But what about getting some real work done? Google Drive is the core office suite and storage mechanism for a Chromebook. It allows you to create or edit Word documents, Excel spreadsheets, PowerPoint presentations and it even has a drawing app.

The functionality of these apps is very good, with the Document app being the strongest, in my opinion. Word processing is a key requirement for business communications and Google Drive handles it solidly. The spreadsheet option is also good and the presentation application is solid, though it did exhibit the occasional strange behavior when playing back complicated animations.

With a product like the Chromebook that is so dependent on Web access, what happens when you don’t have any? Can you get anything done?

Google Drive actually supports an offline mode to let you work on documents while you don’t have Internet access. This works pretty well, with a couple of caveats:

You can even manage your email offline with a Chrome app called Gmail offline. This stores copies of all your emails on the Chromebook so you can compose emails offline and send them when you get a connection later.

Video editing? Not really … but I was surprised to find an excellent photo editing app called Pixlr that runs inside of Chrome.

Printing is really easy if you have a printer that supports cloud-based printing but a little more complicated if you have an older printer. If that’s the case, you must have another computer hooked up your printer and go through a few gyrations to be able to share that functionality. The upside of that complexity is that you can also print from your smartphone or tablet once it is set up.

The Chromebook is also really easy to share between multiple people. You log onto the Chromebook with your Google password and everything tracks for you. Computer settings, your Google Drive files, Gmail … everything. Simple as that.

What can’t it do?

While basic peripherals like storage devices work, most other external devices are not supported. Anything that requires you install a driver will not work.

This is most painful if you use a computer to manage your smartphone. Not only will iTunes not run, but there is no way to even mount an Android as a storage device. You will need a separate computer to handle that task.

Anything that requires serious processing power will stump a Chromebook unless it can offload that processing out into the Web somehow. Some of those things, like video chatting, are going to limit you to a small list of applications. Addicted to Skype? You are out of luck. Perhaps Google Talk and Google Hangouts will cover your needs?

There are some cheap laptops out there. You can buy new ones from about $280 that will feature a larger screen and far more storage. If you were to only have one computer, that would be a better choice. A Chromebook as an only computer would likely be frustrating today, but as more and more processes move “to the cloud,” that could change.

As a second computer, the Chromebook is pretty intriguing. The free 100 gigs of Google Drive storage also combine with 12 free passes for Gogo Inflight Wireless, which allows you to use WiFi on selected planes from AirTran, Alaska Airlines, American Airlines, Delta, Frontier Airlines, US Airways and Virgin America. This is worth somewhere between $50 and $100, depending on the length of those flights. If that appeals to you, then the price of the Chromebook is very low indeed.

I spent the last couple of weeks doing as much work as I could, including all of my blogging (thank you WordPress) via the Samsung Chromebook. I found very few things that I could not get done. Light weight, long battery life and lots of online storage make a nice package. If you were going to buy some additional Google storage and need WiFi on planes, the Chromebook is pretty close to free.

So, in many situations you could absolutely trade your laptop in for a Chromebook. You might even be trading up.

Nearly 15 years ago, Jeff Mac abandoned his career as a journalist to take on the peripatetic and clichéd life of a traveling sales person. In the last 3 years his muse has returned and read him the riot act. He is editor in chief of Restless Tech which focuses on reviews of travel and tech equipment. A Southerner by marriage, he has learned to talk slowly and pass the grits without comment. He focuses on eking every last nickel out of technology and his favorite price is free. With three daughters and three marriages to pay for in the near future this is not optional!