You may actually be lucky. A house built in the 1950s can be easily and fairly inexpensively remodeled into a home that looks modern. The recent rise in popularity of many of the 1950s aesthetics makes it even easier to make these changes to your home. Learn why your older home is in vogue, and what projects you can do to bring your 1950s house into the modern age. 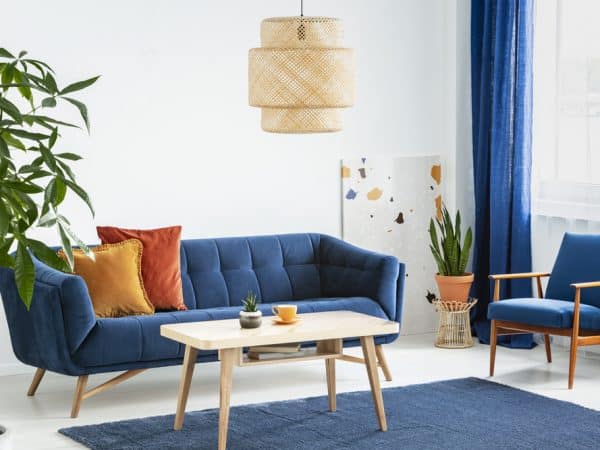 How to modernize your 1950s home while keeping its retro charm

The term is broad and can be used to describe design from the early 1930s to the late 1950s. Its signature is clean lines and natural forms, both in architecture and furniture. It spans several decorating trends, including the use of simple furniture lines with geometric patterns and bold splashes of color.

Because midcentury modern style is simple, it’s also easy to turn into a neutral space if your taste is more traditional or more modern. But it’s likely, no matter your preferences, that your 1950s house could use some updates after decades of use and tinkering.

In many cases, you may be getting rid of less-than-desirable updates made between the 1950s and now, including wallpaper borders, oak cabinets, heavy drapes and wall-to-wall carpeting. However, midcentury design has its own place in today’s decorating world, with geometric print wallpaper and Eames-style chairs as modern upgrades. 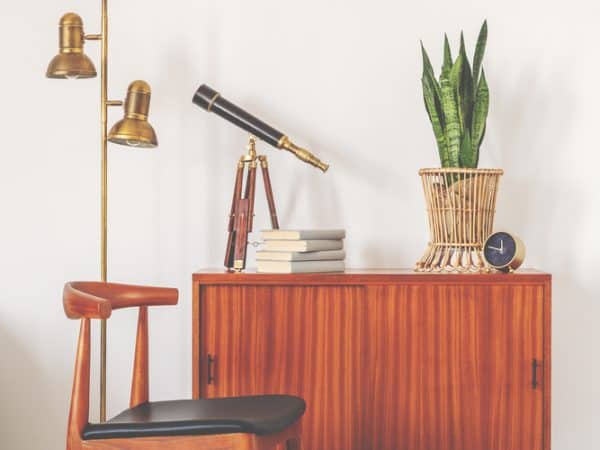 Frederick Wilson, partner at Morgante-Wilson Architects in suburban Chicago, turned a client’s home into a space that says “I live here now.” His clients elected to turn their living, dining and family room, plus the kitchen, into one large open space that merges family room, dining room and kitchen, no living room needed. They also replaced 2-foot windows with floor-to-ceiling glass and swapped out the traditional staircase for one with floating steel. Outside the home, they painted both the brick and the siding the same gray, adding black trim.

With any remodeling job, you can only do so much. So bringing your entire home into the modern era means starting with what you have and embracing its strengths. “You can’t fight the home and fight the low ceilings,” Wilson says. “You have to go with what the lines are for that era.”

Most homeowners will want to remodel kitchens and baths, unless they have already been updated. The choice of cabinets, tile, vanities, light fixtures and other materials can make a big difference, even if you want to stick with the midcentury modern style. Some retro wallpapers lend themselves to modern style, adding personality to the space.

In the kitchen, for example, slab doors and quartz countertops can provide a 1950s look that also fits the modern age, Adler says, especially if the cabinets are white. Stainless steel appliances and sinks also fit the style, but granite and marble do not. 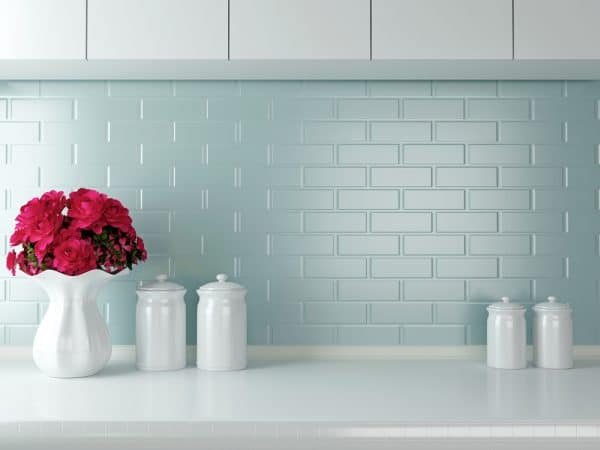 For the baths, it’s possible to buy reproduction 1950s-style bath tiles or go with a more modern look that fits, like oversized subway tile (larger than the standard 3-by-6-inch variety), Adler says.

Projects to modernize your 1950s home

Here are eight home improvement projects to bring your 1950s house into the 2020s:

Many 1950s homes have mixed flooring, with tile in some rooms, linoleum in others and wood in others, sometimes covered with carpet. Today’s style is a unified look, with the same flooring everywhere but the bathrooms. Hardwood is popular in many areas, though some homeowners in warm and humid climates prefer tile. Original hardwood can be refinished (best done before you move in) or covered with area rugs, but you will probably want to replace linoleum, tile or carpet.

Many 1950s houses are dark, without ceiling fixtures. Adding recessed lighting is one way to fix that. “If you have any kind of attic space, that’s generally a not very complicated thing and it’s not very expensive,” Adler said. You can also add ceiling fixtures or just bring in more floor lamps and open the curtains. 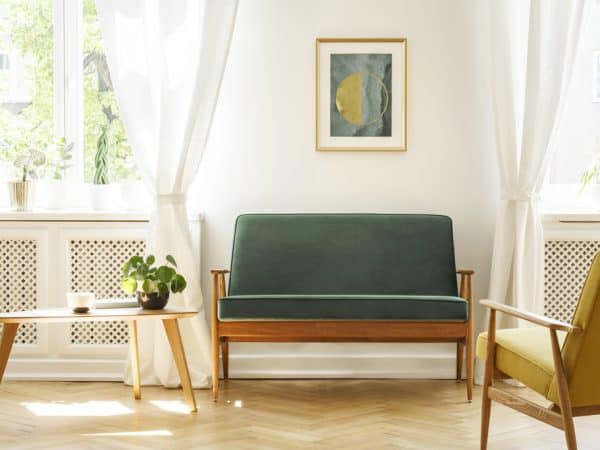 Houses in the 1950s often had separate kitchens, dining rooms, family rooms and living rooms. Removing some or all of the walls dividing those rooms can create the open floor plan that is popular today. “You actually can expand the feel of the house without going outside the walls,” Wilson says. Plus, removing walls brings in more light. “If you have small windows in the home, any time you can open the space and allow light to travel from room to room, the lighter it will be,” Adler says.

4. Hang window treatments at the ceilings.

Many 1950s homes have lower ceilings, and putting the window treatments higher creates the illusion of more height. “This allows the eye to travel up and give the impression of a higher ceiling,” Adler says.

Many popcorn treatments done during the 1950s contained asbestos, so you want to test yours – using either a kit purchased from a hardware store or a test done by a professional – before attacking it as a DIY project and releasing the asbestos where you can breathe it. In lieu of scraping the ceiling or walls, you can skim coat over them, a job that is usually best left to professionals. It’s a messy project, so you’ll probably want it done before you (and your stuff) move in.

If your home still has wood-paneled walls – embrace them. You can paint the paneling, or the wood tones could work as a wonderful background to bright modern paintings and upgraded lighting. 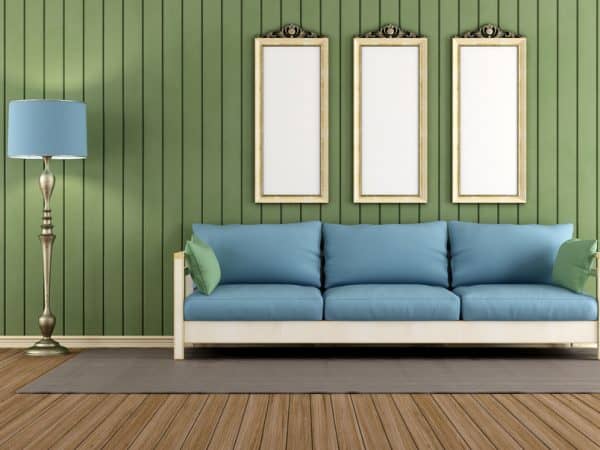 Doors, molding, baseboards and other wood trim were usually stained in the 1950s, a look that feels dated. Painting all those white can brighten and modernize the house. You can also remove or paint wood paneling or even drywall over it.

Homes of the 1950s often had small windows or had windows where today we would put French doors. If your budget allows, enlarging window openings and replacing some windows with French doors can add light and modernize the look of the home.

If your home has an attic, you may be able to create a vaulted ceiling instead of the 1950s flat ceiling. That can both add architectural interest and make the room feel larger. If you don’t want to go to that extreme, paint ceilings a bright reflective white or other color and hang window curtains all the way up to the ceiling; this helps build an illusion of height. 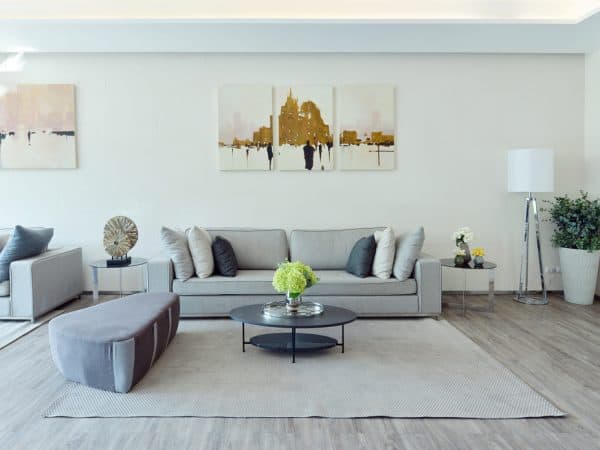