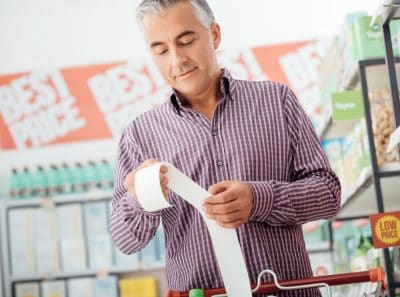 As a human with an XY chromosome, I know there’s definitely a stigma to men using coupons. I remember when I first started using coupons after college. I desperately needed to start paying off those credit cards I foolishly maxed out — mostly on bar tabs, concerts and much-too-expensive clothing. Yes, I, too, succumbed to all of those enticements of a free t-shirt or hat in the student center. Little did I know, a free t-shirt could cost thousands of dollars. If I only knew then what I know now. (For the record, I have never carried a credit card balance since graduation.)

I could feel my mouth drying up, my palms sweating, as I frantically searched for the checkout lane with the fewest customers. If I was lucky, there would be no one. My one other requirement was that the clerk had to be a woman. There was no way I was appearing “weak” in front of another guy by using coupons.

Making unnecessary small talk, I nervously handed over my three coupons to the seasoned clerk, expecting some sort of unwelcome glance or comment. She simply scanned them with no big fanfare and gave me my total. “Well, that was easy,” I thought, relieved it was over. I just saved $3. Three whole dollars that I would not have saved otherwise. I was immediately hooked, but the road to out and proud “coupon clipper” was not an easy one.

For months, I stood strong on my requirements: an empty checkout lane with a female clerk, which meant many late-night shopping trips. My advantage was that, over time, I was secretly honing my money-saving skills. Coupon clipping is not a conversation most mothers have with their sons, let alone from their fathers. Fathers may talk about the birds and bees with their male offspring, but they rarely discuss the importance of bargain hunting and budgeting.

In this culture, coupons are often associated with being “cheap” — and “cheap” for men often implies you’re not good enough. If a man uses a coupon, he must not be able to afford the full price and, therefore, could not be successful. Daughters, on the other hand, are often groomed from a young age on the lessons of being a good “domestic goddess.” A woman uses a coupon and she’s considered a smart shopper. Not true for a man — he uses a coupon and is considered “cheap.”

Friends and family started getting suspicious, when I would show up with several bags of groceries for under $10. My biggest allies were the many female clerks I had come to know on a first-name basis. (You know you’re getting good, when clerks start asking you for advice.) However, the true revelation, and my acceptance that I was undeniably a coupon clipper, occurred when I paid off more than $4,000 in credit card debt in a little more than a year — an arduous task for someone in their early 20s (actually, at any age.) A feat that would not have been possible without coupons.

My secret was starting to get out. Where I was disappearing to late at night? Where was I getting all of this extra money? People started asking questions. I finally gathered enough courage to tell my best friend first, “Yep, I’m a coupon clipper!” And, once he accepted me, I admitted who I truly was to my parents, co-workers and roommates. What a relief to no longer have to keep my coupons tucked away in a shoebox under my bed.

Twenty years later, I now proudly carry my coupon file in the store and don’t care who’s looking. I don’t even care about the chromosomes of the clerk. In fact, I’m even so bold as to stop people in the grocery aisle and tell them they could be getting a better price on something in their cart. Many listen, others turn a deaf ear. I don’t care. I’m only trying to spread the gospel of saving money.

Other than reaching my goal of saving 90% on a grocery receipt, my proudest moments as an out-of-the-closet coupon clipper come from the occasional stranger who will stop me in the parking lot and ask for help. (It’s important to note that it’s always a woman, never a man.)

I would love to tell men that there’s no shame in using coupons. If being a man means being a good provider, clipping coupons is one of the best ways to do so. How is saving money not being a good provider? For fathers, it’s a great opportunity to teach their children about the importance of saving money, building a nest egg and being prepared for life’s unexpected turns. (And, for single guys, most partners are looking for a man good with money, right?)

We all want (and need) to save money. Coupons are one of the easiest and quickest ways to reach your financial goals. With coupons, $10 can become $20, $30 or $40 at the grocery store. The trick is to start visualizing coupons as “cash.” Once you see the savings, and suddenly have extra money for down payments, college tuition or a vacation, you’ll never look back. There is only power in coupons, not weakness.

In the ensuing years, coupons have changed in many ways, but my passion for them has never waned. I use coupons on just about every purchase I make today, including dining out and going to the movies. I’m not sure the “femininity” of clipping coupons will every go away, but saving money is so rewarding in many ways — whether you’re wearing a dress or suit and tie.

To this day, I have male friends who will still not use coupons because it’s embarrassing — even after my numerous lectures. In their late 30s, some are always in debt, living in apartments or even back home with their parents. Yet, they still wonder how I made a down payment of 30% on my condo at the age of 30 and have zero credit card debt to this day. Now, where are my scissors?

Your greatest savings will always come from being a smart shopper in the grocery aisle. With a few great money-saving shopping trips each month, you could easily have an extra $100 (even more, if you’re really good) toward your financial goals. Living on the Cheap always has a great source of manufacturer’s coupons. Companies load new coupons every month, so there’s no better time to set aside your insecurities and start clipping. Trust me, there is no shame or embarrassment in saving money. It’s actually one of the smartest moves you can make for you and your family. 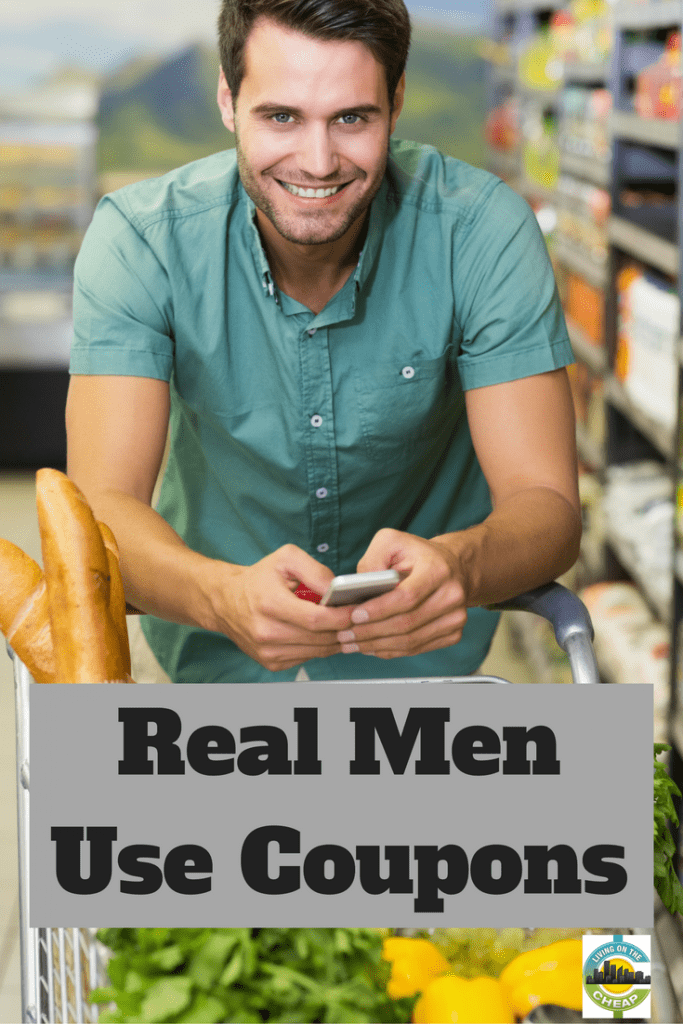