We all know her and some of us hate her:  the gal who can whip up a clever place tag, a holiday banner, a birthday card like magic. Pssst, she has a secret up her sleeve, and chances are she’s always jonesing for more supplies to make that happen. Here are five craft tools you can wrap up to spark her imagination:

1. ATG gun: It’s big and bulky, and crafters adore these tape transfer guns after they lay down their first line of adhesive. They were originally designed for the framing industry, but crafters from scrapbookers to painters are finding ways to use these to tack down materials. There are several knock-offs on the market that don’t work as well, so stick to the brand names, 3M Scotch in the pink casing that holds 1/4-inch tape is the most popular option. SRP is around $40, but most big box stores like Michaels mark it down to $20 or allow you to use coupons to bring the price into that range.

2. Paper cutters: Slicing and dicing paper is one of the biggest frustrations in crafting, since the blades tend to dull or get off track, leaving the user with uneven cuts. Two companies have solved this problem: Cutterpillar Pro is a blade system that sharpens each time it passes against the metal edge. At $129 SRP, it’s a knock-off of a hand-built precision machine that’s no longer in production and cost four times as much; the company’s Facebook page often runs a promo code that brings the price below $100.  Fiskars recently introduced its version of this design to handle even heavier papers like vinyl and cardboard, too: ProCision, which you can find in craft stores like Michaels, Joann and Archiver’s for $119.99.  The stores’ weekly coupons can bring that price down by 40% to 50%. 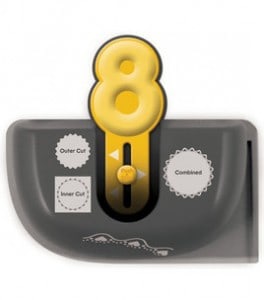 3.Lucky 8 punches: Punching out a border strip of stars, vines, geometric shapes, zig-zags and the like is the rage in everything from cards to home decor, but We Are Memory Keepers kicks that up a notch by creating a tool that allows users to turn a square piece of paper into a decorative circle design. Voila! You have the perfect placemat or wreath or prize medallion within 30 seconds. The tool retails for $39.95, but it’s rare to pay that price; even HSN.com lists it for less. They are also available with coupons at Archiver’s and Joann.

4. Mists. Looking for cool on a smaller budget? Spray mists are showing up in everything from mixed media collages to adding a special touch on a floral arrangement. Think of them as water-based spray paints in a hand-held bottle. The color choices can be overwhelming, so stick with earth tones or jewel tones if you’re in a dither. Tattered Angels brand tends to clog; crafters give Mr. Huey mists a bigger thumbs up in the smooth moves category. Expect to pay $6 or less per bottle. 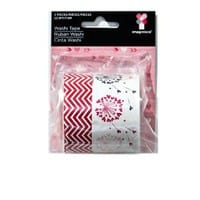 5. Washi tape: As a complement to solid color mists, washi tape (aka paper tape) is a thin masking tape folks tear off the roll to add a pop of patterned color to crafts; teens love it to stick down concert tickets and other memorabilia in their smash books. It peels off as easily as it sticks, so nothing is permanent. Deals and clearance prices are as abundant as the patterns, so never pay more than $5 per roll.

If you liked this article, check out:

Julie Sturgeon is a serial entrepreneur, successfully working as a self-employed business journalist for 25 years. Today she owns Curing Cold Feet travel agency, and has been featured as a travel expert in Time magazine. She also runs social media management company CEOMarketer, where she has increased sales for companies that range from independent hotels to online retailers selling aftermarket parts for Nissans. Lastly, she works behind the scenes as a development editor at Crimson Romance. Julie doesn't sleep much, but she will drop work when IU is playing basketball.