Cheap is good. Free is better, and there’s a lot to see and do in NYC beyond people-watching in Times Square or Central Park. 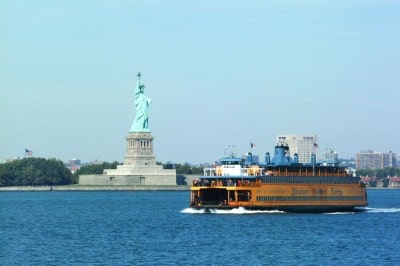 Whether you are a visitor or native, this NYC on the Cheap list of the best FREE things to do in New York City offers something for everybody.

Staten Island Ferry: Get a close-up look at the Statue of Liberty and picture postcard views of the Manhattan skyline.  Please avoid morning and afternoon rush hour, when the ferry is crowded with commuters traveling to and from work between Staten Island and Manhattan.

9/11 Memorial: The site of the original World Trade Center twin towers is a memorial to the victims of that terrible day. Their names are engraved in the marble that surrounds the original footprints of the two towers and their sunken waterfalls. Docents will help you find a particular name, hometown or unit of a first responder. Visiting the 9/11 Memorial continues to be free, but there is a fee to enter the new National September 11 Museum, which adjoins the Memorial.

Sony Wonder Lab: Kids of all ages will enjoy the interactive, high-tech exhibits at this Midtown showcase of current and future technology. Plus, there are free movie screenings most Saturdays of both adult and family-friendly films, and things like robot-building workshops, although the workshops have a small fee.

Apple Retail Stores: Take a test drive of the latest gadgets and gear, check your email, or troubleshoot a problem with one of the Genius Bar gurus.  There also are classes to help you improve how you use anything Apple, from making videos to using the cloud.  There are stores in Soho, Lincoln Center and Grand Central Terminal, but the only one open 24/7 is that famous glass cube at Fifth Avenue and 59th Street.

New York Public Library: You’ve seen the soaring, two-block long Main Reading Room in countless Hollywood films and TV shows.  See it for yourself, along with free exhibits focusing on books or New York City or both.  There are also free docent tours of this historic Beaux Arts building.

National Museum of the American Indian: This outpost of the Smithsonian houses one of the world’s best collections of Native American art and artifacts, from tribes throughout the Americas, from the Arctic Circle to Patagonia. Plus, there are free film screenings, cultural performances and workshops for kids. Be sure to look up at the Rotunda, which reminds me of the U. S. Capitol. This photo is one of the Thunderbird American Indian Dancers, a group of New Yorkers of various Native tribes, who perform often at the museum.

Green-Wood Cemetery: Designed as a park in the 1800s for the residents of the independent city of Brooklyn, before it became part of New York City, it also happens to contain 500,000 permanent residents. They include stained glass king Louis Comfort Tiffany, Broadway musical legend Leonard Bernstein, inventor Samuel B. Morse, and Charles Ebbetts, owner of the Brooklyn Dodgers, who played in Ebbetts Field.  There are both self-guided and docent tours.

Hispanic Society of America: This little-known museum in Upper Manhattan contains one of the largest collections of Velasquez and Goya paintings outside Spain, plus other Hispanic treasures dating from the Bronze Age from Spain, Portugal and Latin America, including intricate tiles from Moorish Spain. There are free docent tours on weekends.

American Bible Society: This is the largest collection of bibles outside the Vatican, along with historic examples of the Jewish Torah and Muslim Koran.  Exhibits rotate three or four times a year.  In the Lincoln Center area, on the same block as an Apple Retail Store.

Federal Hall National Memorial: George Washington took the oath of office here as the first U.S. president.  His statue is out front, and there’s a small U.S. history museum inside.  Take a tour with one of the National Park Rangers, every hour on the hour.  On Wall Street, directly across from the New York Stock Exchange.

Federal Reserve Bank: You’ll feel like a million bucks here, since there’s as much as $100 million in gleaming gold bars stored in the Gold Vault, five stories under Wall Street.  There are daily 60-minute tours, and heavy security that includes no cameras or camera-equipped smartphones.  You must have a reservation and a valid photo ID to enter.

Atlantic Ocean beaches: New York City is the only place in the world I know of where you can take the subway to white-sand ocean beaches, including some stretches dedicated to surfing real waves. Coney Island and Brighton Beach in Brooklyn and Rockaway in Queens have boardwalks, lifeguards between Memorial Day and Labor Day, and plenty of room to spread out a blanket.

Evelyn Kanter is an award-winning journalist who has been reporting on good deals and warning about bad ones, for longer than she cares to admit publicly. A native and lifelong New Yorker, she was the first consumer reporter for CBS News and for WABC TV “Eyewitness News” and helped launch the “Sales and Bargains” column in New York Magazine. Evelyn is the author or editor of more than a dozen travel guidebooks and apps, including Peaceful Places New York City, and owns and operates NYC On The Cheap and EcoXplorer. A long-time tree-hugger, Evelyn also writes about green travel, green cars and saving the green in your wallet for national and regional publications, including a column syndicated by Motor Matters and for Fodors.com, AAA magazines and airline inflights.