Are you champing at the bit to be a part of the Kentucky Derby phenomenon in May but unwilling to pony up the steep price of a ticket?

Choice tickets for the Derby go for more than $1,500 apiece. That’s a lot of bread for what’s been described as “the greatest two minutes in sports,” but you don’t have to shell out big bucks to be a part of the excitement that surrounds this iconic horse race on the first Saturday of May in Louisville.  (This year’s Derby is on May 4.)

The Kentucky Derby Festival is a two-week celebration leading up to the running of the Derby, and the fun is FREE.

The Festival kicks off Saturday, April 20, with Thunder Over Louisville, the largest display of fireworks in North America. “Once you see Thunder, all other fireworks displays leave you a little disappointed,” says Susan Dallas, communications manager of the Louisville Convention & Visitors Bureau. The skies also thunder that day with an air show that’s rated among the Top 5 in the country.

If that isn’t enough excitement for you, the Festival features a number of other festivities:

Most balloon events happen regardless of weather but races are dependent on variables like wind speed.

The runs are on Saturday, April 27. There’s a fee to run but standing on the sidelines and cheering the racers on is free fun.

Teams build a bed, decorate it, dress in outlandish costumes and race in this unusual event slated for Monday, April 29.

Watch the action on Wednesday, May 1, as the Belle of Louisville, the oldest operating steamboat in existence at 99, races the Belle of Cincinnati for the Silver Antlers.

You can buy tickets to ride the boats during the Steamboat Race but watching from the sidelines is free. 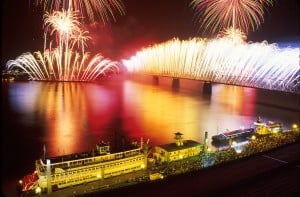 This huge parade with marching bands, inflatables and celebrities happens Thursday, May 2. You can pay to have grandstand seating to watch the parade but otherwise watching is free.

The not-for-profit festival derives its funding in part from the sale of Pegasus Pins. Pegasus is considered the horse of muses and the symbol of poetry with “magical powers, heightening the natural powers of mortals and creating an almost supernatural spirit.”

Pegasus pins, available in five color combinations, are $5, get you admission to some special events and are a great way to support the Festival. The pins come in envelopes and some have a “gold winner” Pegasus pin inside. If you get a “gold winner,” you can register your pin for a drawing for prizes including a $2,500 travel certificate, a $2,500 gift card from Kroger, a $2,500 Meijer shopping spree and a 2013 Honda CRV.

After all the festival excitement, if you really want to be at Churchill Downs for the big event — some 160,000 people attended last year — you can get a general admission ticket with access to the infield for $50 even on Derby Day.

“If you go this way, you probably won’t actually see a horse, but it’s a great party,” Dallas says.

For more information on lodging and other attractions in Louisville, visit Go To Louisville.